This game was developed by me and it was contributed in AtariAge forum competition called Atari BASIC 4K challenge competition. The main goal of the competition was to make a game using just pure Atari BASIC in 4K limit in size, with no help of any machine language routine. It wasn't allowed to use any interrupt routines neither, only basic use of hardware features like player/missiles and sound with the use of simple POKE commands. Game is a board game using dice, which involves some startegy and thinking, too.

Here is my attempt of making 4K game in pure Atari BASIC. First I must say I failed, because my game reached 5K limit. Limit constraints didn't allow me to make a full game, so I had to make some hard decisions and optimizations, which led to limited (2 players instead of choosing up to 4 players, no computer opponent), slow gameplay and some bugs, of course.

Before moving on Atari game, here are some basic rules of real game: It is classic board game with dice, which I used to play with my family and friends in my childhood, called Don't Angry. The board is standard cell playfield with up to 4 players, which play against each other or teamed up. The goal of the game is to move player figures to the final four cells, which belong to her/him. Each player has 4 figures available, which are moved across the cell playground depending on number got from throwing a dice. The winner is player who first fills last 4 cells belonging to her/him. Throwing a dice would become boring at time, but fortunatelly, there is a catch. You must plan smart, what figure to move where and when, deciding of removing opposite figures or escaping from them, or move on with another figure, etc. So there is a strategy of thinking, what move to do next.

Rules of throwing a dice: Each player has three tries to release first figure to starting position. To do that, he/she must throw dice with number 6. Next moves are done by throwing dice once, and figure is moved accordingly. There is one exception where you can move twice or more in a row, and this is by throwing dice 6. This way you can decide to move current figure further or release another figure to starting position. If there is other player's figure in the same spot, it is removed of your way and moved out of playground.

My game is little different, because competition limit constraints didn't allow me to follow strict rules of standard board game. So I have made some little changes in rules. Only two players can play, 1 and 2. Other two are here just for observation with no effect to the gameplay at all. Unfortunatelly, there is no computer player, of reasons described (5K limit). If you are alone, you can play for both players :) The winner is player who move any two of their four figures first to the final four colored cells. The rules could be different, but I didn't want the game to last very long.

The game has some bugs: - Figures of the same player can overlay each other (this can become confusing) - Opposite player figure is not removed when current player's new figure moves to starting position (if they are both in the same cell spot)

So here it is. Don't Angry, it is just pure short Atari BASIC game.

My observation... Atari BASIC is great, but also limited in some ways. But with more free RAM and using assemly language it becomes more powerful and many wondeful things can be done. 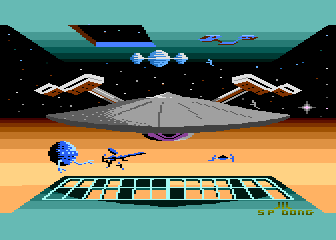